“You fools!” Jesus responds to critics of raising the minimum wage

Posted on February 13, 2013 by Susan Thistlethwaite 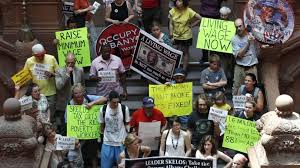 Opposition to raising the minimum wage is all about greed, as concerns about unemployment are unsupported.  Research shows increases in the minimum wage actually do not reduce employment, and these hourly increases immediately help raise people out of poverty because they earn more money for their families.

The last battle to raise the minimum wage was epic.  It took two years to win, but was ultimately successful in 2007.  Republicans added billions of dollars in amendments to a bill that would add $2.15 to the minimum wage. Watch Senator Ted Kennedy’s historic speech, where he asked, “When does the greed stop?”

It is greed that keeps the rich wanting more and more, even at the price of a couple of dollars more per hour for millions of hard-working men and women.  They store up their treasure in barns and they can’t even spend it all.

The price of this stubborn, intractable greed is your soul, you know.

I am President Emerita and Professor Emerita of Chicago Theological Seminary; I write for the public here and in local papers. I am interested in what I call "public theology," or how deeper meaning is made and contested in the public square.
View all posts by Susan Thistlethwaite →
This entry was posted in Uncategorized. Bookmark the permalink.
%d bloggers like this: