Jesus was not an NRA member

Posted on April 11, 2013 by Susan Thistlethwaite

While Jesus was clearly not a member of the National Rifle Association, many Americans might be under the impression that Moses was.

Charlton Heston and his famous defense of gun ownership have done a lot to cement the idea in our mad gun culture that unfettered gun ownership is a positive value, even a religious value.

Heston: “You can have my guns when you take them from my cold, dead hands.”

Heston’s pose with this rifle has a striking resemblance to Heston’s famous pose as Moses parting the Red Sea.  Oh, the power of image. 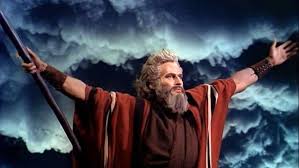 We need an equally powerful and emotionally compelling image to counter Moses/Heston and the ways guns have been imprinted on the American people as an emblem of freedom and even “Christian” values.  Yes, you have to see Moses as representing “Christian” values for this image to imprint, but surprisingly it’s not the biggest contradiction we face.

As I watch the Senate dithering around over getting to a vote on a fairly weak background checks bill, I have to applaud those citizens who are working to change the positive image of guns in our society.

Moms Demand Action has done it. They have released a new video that gets right to the heart of the pain and the cause.  It’s the guns.  It’s the ammo.  It’s the shooting.  It’s wrong.

I support Moms Demand Action (love the #strollerjam).  This is the counter-messaging we need. It is deeply faithful and effective.

I am President Emerita and Professor Emerita of Chicago Theological Seminary; I write for the public here and in local papers. I am interested in what I call "public theology," or how deeper meaning is made and contested in the public square.
View all posts by Susan Thistlethwaite →
This entry was posted in Uncategorized. Bookmark the permalink.
<span>%d</span> bloggers like this: