According to the GOP, when Jesus said feed the poor, he didn’t really mean we should do that all the time.

At least that’s the biblical interpretation of some Republicans on the House Agriculture Committee and their justification for approving a sweeping farm bill that would cut $2.5 billion a year – or a little more than 3 percent—from food stamps, a crucial anti-hunger program.

Due to the “Great Recession” and jobless recovery, one in seven Americans now use this domestic food aid program. So clearly, according to Republicans, too many people are eating. 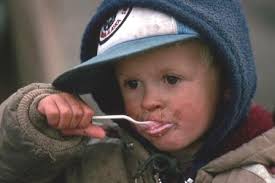 One of the faces of hunger in the U.S.

Representative Juan C. Vargas, Democrat of California , who opposes cuts to the food stamp program, quoted from Matthew 25 to argue against the cuts to food stamps.

This was an excellent choice by Rep. Vargas as Matthew 25 shows exactly how angry Jesus gets at those who refuse to feed the hungry, as readers of #OccupytheBible know.

“I’m a Christian, and this chapter talks about how you treat the least among us,” said Mr. Vargas, adding that he would not support a bill that made such deep cuts to the antihunger program.

That was much too much biblical literalism for some GOP members of the committee. K. Michael Conaway, a Texas Republican, pushed back.  Jesus didn’t really mean we should all do that together as a nation, he argued. “I take umbrage to that,” he said. “I take Matthew 25 to mean me as an individual, not the U.S. government.“

Except Matthew 25 is called “The Judgment of the Nations” because “All the nations will be gathered before him.” (Matt. 25:32)

To make it worse, Stephen Fincher, Republican of Tennessee, then quoted Matthew 26, arguing the “poor will always be with us” in his defense of cuts to the food stamps program.

Here’s some news for you, Congressman Fincher, that text doesn’t mean ‘be sure you keep some people poor.’  And Congressman Conaway, Matthew 25 has no “opt out” clause that means you don’t have to vote for programs to feed the poor because “individuals” and “churches” will take care of it.

“Judgment of the nations” means just that.  Read the text.

If you GOP congresspeople want to call yourselves Christians, you don’t get to opt out of your religious values when it’s a “government program.”

As I’ve been interviewed over and over on conservative Christian talk radio on #OccupytheBible, this is the crisis we face that is generated by a hyper-individualized and incorrect interpretation of scripture.  These Republicans want you to believe individual charity is fine, government programs are bad.

But that’s not what the Bible actually says.

“Grover Norquist told me so” is not going to be enough of a defense when Jesus asks you why you voted to literally take food out of the mouths of children.

Judgment of the nations. Get it?