Jesus, Justice and French Fries: A Parable for Labor Day

Posted on August 31, 2013 by Susan Thistlethwaite

This Labor Day, fast food workers are striking across the country. Their demands are simple: they want to be able to form unions without employer retaliation and bargain for higher wages. 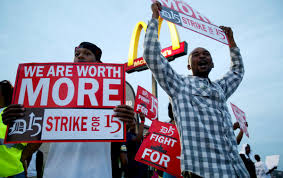 Christians who follow Jesus should support these strikes, in my view. After all, Jesus sends the disciples out to labor and tells them to accept food and housing because “laborers deserve to be paid.” (Luke 10:7)

But the new American economics of austerity combines huge corporate profits with low wages for workers.  In the fast food industry, for example, this has created a “veritable buffet of injustice,” as I wrote for the Washington Post.

But I learn a lot from readers of what I write in public theology, and one person offered the Parable of the Workers in the Vineyard as a possible contradiction to what I had written that Christians should support fast food workers and their need for higher wages.

But, as I write in #OccupytheBible, parables are “Street Theater” when Jesus tells them.  There is an ‘ah ha’ moment when the prevailing order is challenged and the astonishing impact of the in breaking of the reign of God turns everything upside down.

But wait.  Remember that the Gospels are particular narratives that come from and speak to particular faith communities in formation, but they are based on the teachings and actions of Jesus of Nazareth sometimes more than fifty years before the Gospel was composed.

This parable is found only in Matthew; he inserts it in basically the same narrative in Mark that he follows, but between Mark 10:1-31 and 32.

Matthew has the parable talk to his location and that of his struggling community, where those who converted or joined became part of the “vineyard,” i.e. the community that followed Christ. Thus the last ones to join, the new converts or Gentiles, would hear this parable as teaching them that they would be “first,” and the Jewish people, who were hired “first,” would be “last.”  Thus he introduces the parable with the phrase, “the Kingdom of Heaven is like…”

But what happens to the parable when the location is not Matthew’s struggling community of reformer Jews and new converts, including Gentiles, but those rural areas where Jesus of Nazareth was trying to teach about what happens when the “Kingdom is among you” as he walked around the land of Israel from Judaea up to the Galilee?

The actors in this setting of a field where grapes were grown are not theological “types,” per Matthew’s use, but actual classes of people in the time of Jesus, and they would be easily recognized by Jesus’ followers who came out from the fields, or even from the towns and cities to hear him.

The landowner is one of the elites of Jesus’ time; owing land was real wealth.  And the portrait of the landowner is this: he can pretty much pay the workers whatever he wants and they are so desperate for work they can hardly protest. After all, there is enough surplus labor that people are standing around all day long waiting to get hired.

There’s also a casual shaming of the workers who put in a full days work in grueling conditions. They expect to be paid more, even perhaps “overtime”?

And so, like the fast food workers today, they protest.  Even in such dire economic conditions, where there is clearly a huge surplus of day labor, they dare to raise their voices.

“Friend,” says the landowner, condescending to one of them, ‘I can basically do what I want with what is mine.’  Nothing is said about what is just, what is owned to people who have worked hard.  The landowner says, this ‘belongs to me.’  All of it.  In fact, one of the chief clues to the fact that this is not the Kingdom of God “among you,” as Jesus taught, is that the parable constantly refers to the “landowner.”

In ancient Israel, individuals don’t really “own” the land,  the land belongs to God and it is God’s to distribute.  This is the basis of the “debt code” where land could be redistributed every Jubilee year, that is, the year when all debts were cancelled and the land redistributed.  There is a deep truth that this Jubilee concept recognizes, namely that the more one accumulates the more the desire for more increases.  This eventually becomes the kind covetous greed that destroys community and makes the many into the slaves of a few.

It’s also crucial to realize that those who work the land have a deep connection with it; to say that it is owned only by individuals, or even corporations and that the workers should have no say in how much they are paid, their overtime, their health and safety conditions, is an affront to God.

Jesus is telling this parable to get those who work the land to recognize how different this “landowner’s” viewpoint is from what is traditional Jewish belief, that God gives the land and human beings work in community to create abundance for all that all may live.  But now, in Jesus’ time, there’s a new system that has grown up, where the surplus wealth created in the cities has allowed a small number of the rich to buy up the land and act as if they can just do what they want with it. This, teaches Jesus through this parable, is not the Kingdom of God.

Here’s the question that poses the crisis of decision in this parable: suppose the land is not really the “landowner’s,” but God’s, and it is not the landowner’s decision what is just, God’s?  How would we organize our agricultural work if we believed that?

How would we organize our companies today if we truly believed that everyone had a stake in the economic well-being of the company, and that God’s justice is at stake in how we work and how we get paid?

The Parable of the Workers in the Vineyard is truly a Labor Day parable.

1 Response to Jesus, Justice and French Fries: A Parable for Labor Day