Posted on September 15, 2014 by Susan Thistlethwaite 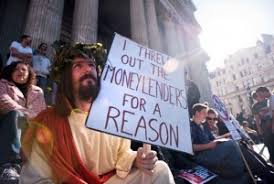 Americans sharing more equally in the burden of pulling our country out of massive debt, and using tax revenue to stimulate the economy and create jobs isn’t “class warfare,” it’s actually Christianity.

Many Christians are starting to find the increasing concentration of wealth in the hands of a few very rich people to be an enormous moral and ethical problem. Catholic theologians and ethicists took pains recently to challenge Speaker Boehner on Catholic values in regard to his views, particularly on the economy.

But not all Christians agree with those perspectives. Today, not only is economics a political battleground, it is a faith battleground particularly in Christianity. According to some Christian conservatives, unregulated capitalism, with all its inherent inequalities of wealth, is God’s plan.

“Christian Captialism,” in their view, isn’t an oxymoron, it’s God’s will as revealed in the Bible. God wants you to own property and make money, and if some make a lot more money than others, that’s okay. In fact, it’s God’s will too.

These competing views are very influential in our current public debates. The Christian conservative viewpoint, however, has been more instrumental in shaping our political shift to the right in recent years, not only on social issues, but also on economic issues. You can see this display in the “God Hates Taxes” signs carried at Tea Party rallies.

Let me be clear as I can be. We need to understand the so-called “Christian” underpinnings of the anti-tax, anti-government, anti-the-poor, “let him die” approach to economics and public policy today as completely unchristian, as well as un-American. What we need to do is re-establish our national values of fairness, equality and opportunity for all, values that I believe are actually the core of the Christian faith, (as well as of other religious traditions and of humanist values).

Part of the way we got here is by Christian conservatives ignoring a lot of what the Bible says on wealth and poverty, and being highly selective in what they call “biblical.” In all these reference to the “Bible,” the self-styled Christian capitalists don’t ever seem to recall that in the Book of Acts, the early disciples “shared all things in common.” As I have written, the early church is Glenn Beck’s worst nightmare because it was socialist.

This is what the bible actually says about the economic practices of Jesus’ followers: “Now the company of those who believed were of one heart and soul, and no one said that any of the things which he possessed was his own, but they had everything in common… There was not a needy person among them, for as many as were possessors of lands or houses sold them, and brought the proceeds of what was sold and laid it at the apostles feet; and distribution was made to each as any had need.” Acts 4:32-35.

Glenn Beck’s attacks on the Reverend Jim Wallis, an Evangelical Christian who works on poverty issues from a biblical perspective, is illustrative of the need of the far right to discredit biblically based anti-poverty political work.

But as I, and Jim Wallis and others, have shown over and over and over, the biblical practices on justice for the poor are far more radically egalitarian than anything being proposed in terms of economics today by Democrats.

Not only do we need to understand that “Christian Capitalism” isn’t Christian, we need to understand how it is distorting capitalism. The “ultracapitalism” of people like Speaker Boehner and Paul Ryan (among others) is often called “market fundamentalism” and it is the nearly unshakeable faith held by its true believers that the best economic results are obtained when the market is allowed to function without the restraints of regulation. Just reduce taxes and let the “job creators” do their thing. Remember “trickle down economics” from the Reagan years? This is the belief system that launched the Reagan Revolution in the U.S. and started the decades long reduction in real wages of the American middle class and the rise in American poverty levels.

“Market fundamentalism” isn’t good, it’s the economic theory that is rotten to its core, and, as Kevin Phillips argues, “bad” for our economy. Phillips, in his book Bad Money: Reckless Finance, Failed Politics, and the Global Crisis of American Capitalism shows exactly how it is that the Christian conservative view that unregulated capitalism is God’s will props up, or enables, the bad economic theory of unfettered, “reckeless” capitalism. In his book, Phillips connects the dots on how conservative religion and market fundamentalism mutually reinforce one another, to the great detriment of the country and the world. He calls Christian fundamentalism the “enabler” of market fundamentalism and shows how conservative Christianity provided the cultural shift necessary so that ordinary Americans would become anesthetized to their previous suspicion of unregulated capitalism born in the 1930’s.

Phillips observes that the complete breakdown in the United States these days of realistic thinking about how markets and financial systems actually do work has three sources: “homage to financial assets,…market efficiency” and “evangelical, fundamentalist, and Pentecostal Christianity, infused with a millennial preoccupation with terrorism, evil, and Islam…” These are the three legs of the stool that caused the “de facto anesthetizing, over the last twenty years, of onetime populist southern and western” regions. It should be noted that these are the same sections of the country that are demographically the regions with the highest Tea Party concentration, especially the south.

“Anesthetizing” is a great metaphor for what’s happening in our public square about the economy because you have to be nearly unconscious not to realize that “Christian capitalism” is neither good Christianity or good capitalism. It’s not “Christian” because it ignores the central teachings of Jesus on the moral imperative of taking care of the poor in the Sermon on the Mount, and it dismisses the actual economic practice of the disciples as described in the Book of Acts.

It is also lousy capitalism. Capitalism is an economic system where the means of production are privately owned and operated for profit in a competive market. The capitalist system relies on self-interest, not “stewardship” to actually run. Theories of markets actually assume that people will act according to their self-interest and not from a disinterested love of others.

This has been known for a very long time. In 1776, Adam Smith, sometimes considered the “father” of modern economics, related how human nature and markets work. “It is not from the benevolence of the butcher, the brewer, or the bakers that we expect our dinner, but from their regard to their own interest. We address ourselves not to their humanity but to their self-love, and never talk to them of our own necessities but of their advantage.”

Capitalism isn’t “God’s Plan,” it’s an economic system that runs on the human desire for more, our own self-interest. This is necessarily evil. It can actually be a very productive system, but it is not beneficent. In order for there to be good values in our economic life, capitalism needs to be regulated so it does not wreck the whole ship with unfettered greed (as happened in the banking industry starting in 2008), and it needs to be supplemented with social safety nets and tax policy to achieve an approximate (not absolute) “freedom from want” as in Franklin Roosevelt’s wonderful phrase. It was Roosevelt who translated “Freedom from want” into a series of government programs to make it a reality such as Social Security, unemployment insurance, aid to dependent children, the minimum wage, housing, stock market regulation, and federal deposit insurance for banks.

The Christian approach to economics is to be the conscience of the nation and to insist that we regulate capitalism so it does not become reckless and destructive. Christians must call on the nation’s politicians to have us share the burdens and the sacrifices, as President Obama is doing, in order get to the “freedom from want” that is in our democratic values and our faith values.

We do this because the Christian conscience is driven by duty to “love God with your whole heart and your neighbor as yourself.”

I am President Emerita and Professor Emerita of Chicago Theological Seminary; I write for the public here and in local papers. I am interested in what I call "public theology," or how deeper meaning is made and contested in the public square.
View all posts by Susan Thistlethwaite →
This entry was posted in Uncategorized. Bookmark the permalink.
<span>%d</span> bloggers like this: