Chapter 8: Jesus Against Rome: The Crucifixion

Chapter 8 is on the fundamental weakness of power exercised as violence as seen in the crucifixion of Jesus of Nazareth by the Romans.

Mel Gibson’s controversial film, The Passion of the Christ, illustrates the theological use of violence to make God into a divine “child abuser.”  In the conservative Christian view that this very violent film reflects, Jesus is brutalized in order to “save” humanity from our sins.  But since this is cast as “God’s plan,” it makes God into the author of this violence and absolves the cruel and vicious Roman Empire.  It also feeds Christian anti-semitism as the Jews, not the Romans, are blamed for the death of Jesus.

This is a clip of the flogging of Jesus from the Gibson film.  Because the content is so violent, viewer discretion is strongly advised and no one under 18 should be allowed to view this content:

The weakness of power as cruel violence can also be seen in the decisions in the Bush administration to engage in torture. 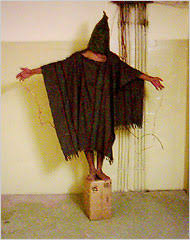 It also highlights an increasing danger in the U.S. today with the militarization of police forces that poses a danger to democracy.

Yet, we cannot forget that our goal is to bring out our common humanity to try to do the best we can to bring in the Kingdom “on earth as it is in heaven.” This kindly act by an NYPD officer is clearly coming from individual compassion.  But individual compassion without the systemic changes of “Jubilee ethics” do not solve intractable problems like homelessness long term.